The following article was previously posted on TB Joshua Watch nearly 2 years ago. It examines the warnings from scripture about false christs, and asks whether TB Joshua is one. Since this article was published, some keen followers of TB Joshua have strengthened our case by outright claiming he is a messiah, a message we believe originates from SCOAN themselves.

For false christs and false prophets will rise and show great signs and wonders to deceive, if possible, even the elect. (Matt 24:24)

Most TB Joshua supporters will immediately raise their hackles at the above verse. It has been used against him several times before, most notably in the Deception of the age video. In this post, we will look at several reasons why some may consider TB Joshua a false Christ.

What is a false Christ?

The original greek word used in the verse above is pseudochristos. The first part of the word (pseudo) refers to something that is  false, fraudulent, or pretending to be something it is not. The second half (christos) literally means “anointed one”, and gives us the word “Christ”. A false Christ is anyone who takes the place of Christ as a mediator between man and God. The bible tells us “there is one God and one mediator between God and men, the man Christ Jesus” (1 Tim 2:5). We believers can have a direct relationship with God through Jesus Christ, we don’t need a priest, a man of God, a deliverer – we have Christ, who is all those things to us and more.

In the following paragraphs we will examine some evidence that we believe shows that TB Joshua’s ministry takes on a “christ like” position in the lives of his followers.

His words are considered equal to the words of God

First of all, have a click through the Emmanuel TV website. It is littered with quotes from TB Joshua (I counted 13), but it has less than half that number of bible verses. The quotes are generally harmless enough, but why the emphasis on TB Joshua’s quotes? There’s not another major ministry we’re aware of that puts such an emphasis on the words of one man to the detriment of scripture. (Editors note: Since this article was originally written we have proven that many of the quotes attributed to TB Joshua are in fact stolen from other authors)

Ex disciple Gareth reports that “A lot of the time in a disciples life is spent studying his “notes”, that is TB Joshua’s writings. Any visitor to the church will testify to seeing disciples reading and copying out these notes into the early hours of the morning. Disciples regard these notes as equal in authority to the Bible”, Giles talks about the TB Joshua’s “quotable quotes” which disciples are expected to season their speech with. In his sermon “With such power”, TB Joshua himself says “In order to exercise such power, the man of God must be infallible. The baptism of the Holy Spirit gives this infallibility. Whatever he says is always complete and correct; whatever he writes is infallibly accurate.” This view is clearly supported by avid supporter and commenter on this site Soe, who tells us that “every word [TB Joshua] speaks is spirit-filled- and words become Gods word when they are affected by the Holyspirit”. (link)

He is the healer 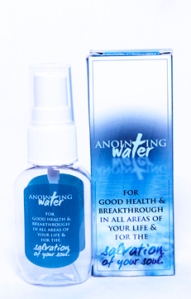 Before his fans cry out “but he is constantly saying ‘I am not the healer, but I know the healer’”, let’s look at the reality.

Finally, consider the title of the official Emmanuel TV blog: “Distance is not a barrier”. Distance from whom? Considering Christians believe that God is Omnipresent, it can’t be referring to God. TB Joshua on the other hand is not omnipresent, he is based in Nigeria and Emmanuel TV is his main vehicle for getting his message across. Now look at the banner image – it is a picture of TB Joshua with his hands raised towards the viewer as if he is praying for them. I think based on these observations it is quite clear that the word distance is referring to distance from TB Joshua. If Jesus is the healer, then distance from TB Joshua is an irrelevant point. It is only if TB Joshua is seen as the healer that this tag line makes any sense.

The most obvious example of this is the video posted recently on this site of people at his church singing a song of praise to “TB Joshua, the man of God” which includes the line “everything about him is good”. This took place at his church SCOAN, and was proudly shown to a visiting TV crew.

Unfortunately this kind of idolatry is not uncommon amongst his flock. While it’s not fair to hold TB Joshua responsible for all the views of his followers, there is no evidence that these extreme views are being challenged or refuted by SCOAN. Gareth recounts how someone had a dream that TB Joshua was the younger brother of Jesus (which of course makes him the son of God!), far from being corrected for this seriously errant view, the testimony was filmed and played back to all foreign visitors!

A quick browse through the TB Joshua blogs and you quickly come across some real shockers. For example:

what a God we worship through Prophet TB JOSHUA (from here)

Jesus prayed that his executors would be forgiven, but woe betide anyone saying a negative thing about TB Joshua

saying negetive things especilally about a man of God Prophet TB Joshua, is asking for curses. He is an anointed man of God. (from here)

TB Joshua as er, the son of God?

“TB JOSHUA IS JESUS of our time” (from here)

Everything T.b.Joshua does is purely christlike (from Doe, a TB Joshua watch commenter)

TB Joshua, saviour of the world:

u can’t change my love for him b’cos his send from God to rescue the world! (another comment on this site)

Finally, most comically – TB Joshua as a country.

I pledge to TB josua my country.
To be faithful, loyal and honest.
To serve TB josua with all my strenght.
To defend his unity.
To uphold his honour and glory
So help me God. (from here)

Finally, consider the blogs supporting his ministry. TB Joshua Fanclub, TB Joshua Fans, TB Joshua Testimonies… Is not this man an object of worship to his followers?

So to those TB Joshua supporters who hang around here, we’d love to know: