You may recall that SCOAN claimed last year the President of Sierra Leone Dr Ernest Bai Koroma requested the anointed water as a cure for the outbreak of Ebola in their country. During last Sunday’s SCOAN service, a civil servant from Sierra Leone called Mrs Fatmata Kargbo testified to the success of the anointed water in curing Ebola in their country. They also criticised health organisations for hindering their attempt to spread the anointed water cure, claiming that without the obstacles Ebola could have been over immediately. See the video below, the relevant section starts at around 8:45.

A few key quotes to point out:

11:11 “Evangelist” Chris Tonge: You mean to say that you were sent by the president of Sierra Leone to actually receive the anointed water sent by “Prophet” TB Joshua to your nation to fight the scourge of Ebola?

12:15 – They faced many obstacles from the time the plane landed, people and organisations wanting to prevent it being used, but the President allowed it (13:25).

So now we have second confirmation that the request came straight from the president, and after delivery he authorised its distribution. If this is true, that should be of grave concern to citizens of Sierra Leone and NGO’s like the WHO. If it’s false, Dr Koroma has some civil servants to fire. This claim is incredibly damaging to his reputation and the reputation of his country, and it’s being broadcast on one of Africa’s biggest “Christian” TV channel.

15:40 – if we were allowed to use the water as the prophet directed, it would have been over right away.
16:05 – faced obstacles from health organisations
17:20 – people said there wasn’t any scientific proof that it cures Ebola, but we pushed through.
17:30 – since that time, 16th August we have been monitoring to see if there are any improvements.
18:16 – from August, we have been monitoring – these regions have been free of Ebola

So what about her incredible claim that a month after the 16th August, the regions where it was ministered have been free of Ebola? First thing to note is that she doesn’t state a year, does she mean 2014 or 2015? Typical SCOAN obfuscation. We will assume she means August 2014 because the 16th August 2014 was a few days after the anointed water was delivered, and in August 2014 the press in Sierra Leone were reporting that the water was being distributed (* if you think she meant August 2015, see note at end of article). So were the regions where it was administered “cured”? Let’s take a look at some WHO data:

On August the 29th, the outbreak in Sierra Leone looked like this

One month later, what do we see? No regions are fairing any better, but two regions without active cases in August now have active cases. In other words it’s got worse.

What about a month later? On October 31st we can see that every single region has active cases of Ebola. 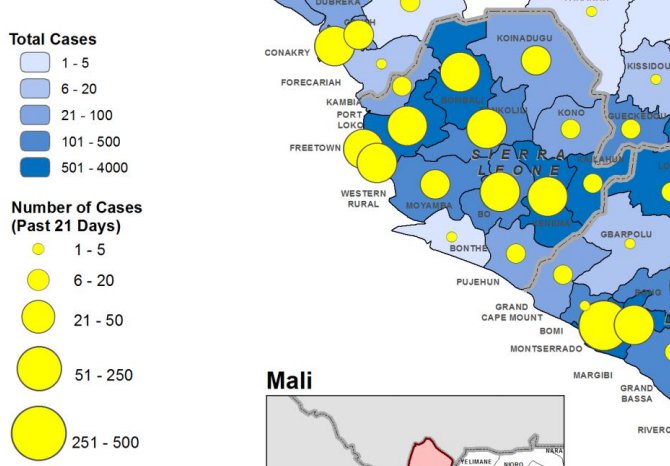 So what we have from SCOAN is a complete lie about the efficacy of their anointed water against Ebola, and an insult to the medical teams who so bravely risked their lives to eradicate the disease. We’re used to lies from SCOAN, but these kind of lies are worse – they are literally deadly. Ebola can be relatively easily contained when correct practices are observed, the promotion of “water cures” is the highest degree of irresponsibility. There should be no claims about Ebola cures without genuine evidence and research backing them up, the testimony of one woman (contradicting WHO data) does not come close.

* If she did mean August 2015 this would also be incredibly deceptive because by that time, thanks to the tireless and brave efforts of aid workers and medical staff, Ebola was already mostly wiped out. On May 14th 2015 a news site reported that “Just last week, Liberia was declared Ebola-free after 42 days — two full incubation periods — without a reported case of Ebola. Now, Sierra Leone may be close to being able to start the same kind of countdown.”

In August 2014, TB Joshua claimed that the Ebola situation was over, and everyone could go back to how they used to live (shockingly dangerous advice). You can hear his words in our “Top 3 prophecies of 2014” video. In the same month, he offered to send his anointed water to any of the affected countries, but only if a request came from the government. Incredibly, it appears that one country, Sierra Leone did request the anointed water.

How has that worked out for Sierra Leone? Tragically, very badly. First, let’s look at what happened to Ebola cases and deaths after the anointed water was delivered (according to WHO data).

Secondly, let’s look at how Sierra Leone compared to other affected countries. From the same WHO data we learn that:

What can we learn from this? One thing is certain – the anointed water did absolutely no good for Sierra Leone whatsoever. It is possible that it even contributed to the number of deaths. Telling people they can go back to the way they used to live, is the worst possible advice that can be given regarding Ebola. Ebola is relatively easy to contain if simple sanitary measures are taken. The fact that unsafe burials were a particular issue in Sierra Leone could suggest a preference towards more traditional medical care, hence the deadly idea of accepting “anointed” water.

Most anointed water testimonies are carefully choreographed and edited, we only see what SCOAN want us to see, and we only see the cases where they can spin it as a success. The gift of anointed water to Sierra Leone is a rare opportunity to measure its impact with real data. As you can see, the data show that at best the anointed water did nothing, at worst it caused unnecessary deaths.

Think about this before considering the anointed water as a solution to your problems.

Following on the from the Zimbabwe health minister’s warning, Dr Richard Kamwi, the minister of health and social services warned his country that “No Namibians should take the risk of travelling to Ebola-affected countries for religious congregation. Visiting Ebola-hit countries will put us all at risk of getting the infection and spreading the disease to Namibia.” (source)

It’s encouraging to see countries taking the threat of charlatans such as TB Joshua seriously during this crisis. Neither Zimbabwe or Namibia have had a case of Ebola so far. This is in stark contrast to Sierra Leone (the one country supported by TB Joshua), whose problem is only getting worse.

TB Joshua’s Synagogue Church of All Nations (SCOAN) have released two videos clearly making the incredible claim that the request for the anointed water sent to Sierra Leone came direct from the president, Dr Ernest Bai Koroma. In the latest video, it is TB Joshua himself making the claim. Both these statements are in the video below.

Interestingly, the president’s public website acknowledges TB Joshua’s donation of $50,000 but says nothing about the donation of anointed water.

Now the mainstream press are picking up on the story, but the important question that remains unanswered is: Did the President of Sierra Leone Dr Ernest Bai Koroma really personally request water as a cure for the Ebola outbreak in his country?

It is time for the Sierra Leone government to come clean on this and release a formal statement.

We’ve got to admit, it took us by surprise. A country actually took TB Joshua up on his offer of a donation of anointed water to fight the Ebola virus. Joe Fayia Nyuma, representing the Sierra Leone High Commission to Nigeria claims that the request for anointed water came straight from the president Dr Ernest Bai Koroma himself. In the video below, it claims TB Joshua sent $50,000 donation, 4000 bottles of anointed water on a chartered jet, costing an additional $50,000. Nyuma claims that the anointed water will be used to “curb the deadly Ebola yoke that is about to destroy our nation”.

While we at TB Joshua Watch fully believe in the healing power of God, we do not believe that he operates like a vending machine, dispensing healing at the puff of a spray. The anointed water is completely unbiblical and idolatrous, and in a case like this will only hamper the efforts of brave health workers battling this disease. The World Health Organization reports that so far 170 health workers have contracted the virus and 80 have died. Meanwhile, TB Joshua uses the crisis to promote his anointed water and brag about how much money he spent on a private jet.

Of course it is possible that SCOAN have made all this up and that Joe Fayia Nyuma was not acting on behalf of his government. If this is the case, it is imperative that the authorities in Sierra Leone clearly distance themselves from this stunt. (Update: the website for the Office of the President have announced TB Joshua’s monetary donation, but no mention of the anointed water)

We hope it is only a matter of time before the Nigerian government takes decisive action against this dangerous con artist.

The full video is below, the statement from Joe Fayia Nyuma starts at 6:10.

A worrying news report was broadcast yesterday revealing allegations that there were people at SCOAN carrying the deadly Ebola virus.

This should not be surprising, SCOAN attracts thousands of sick people from all over Africa every week. Even if the allegations are currently untrue, it is only a matter of time before the virus arrives. SCOAN need to take immediate action to put a stop to the masses of international visitors arriving each week, and if they won’t – the government should do so on their behalf.

There have also been unconfirmed reports (please post a link to the video in the comments if you have it) that TB Joshua is sending his anointed water to Liberia for distribution amongst Ebola victims. If this is true, it is a terrifying development. We foresee Ebola victims forgoing proper medical attention, spraying anointed water on themselves and proclaiming themselves healed – before returning to their communities and passing the disease on to others. If the reports are true, it is the height of irresponsibility, and we urge the government in all affected countries to denounce TB Joshua’s anointed water as a method of disease prevention.

We would like to take this opportunity to remind everyone that despite what SCOAN may say – there is not a single credibly verified case of anyone being healed of HIV by TB Joshua, and two international news agencies have reported cases of people dying of HIV after being “healed” by TB Joshua. If his powers don’t work for HIV, don’t trust it to solve the Ebola crisis.