President of the Ghana Pentecostal and Charismatic Council (GPCC), Apostle Dr. Opoku Onyinah, has cautioned Ghanaians not to rely on Anointing Oil and Water for protection against the fasting spreading deadly Ebola virus since proper observation of sanitation is one of the core values God has instructed mankind to practice to stay healthy.

The whole article is well worth reading.

Update: Now the BBC are reporting on the story too (now one of the most read stories on the site)
Update 2: The police have now banned SCOAN from holding meetings in their Spintex venue.

Sadly, all the hysteria about the new, upgraded anointed water packaging turned to tragedy on Sunday when a stampede happened at SCOAN Ghana. 4 people were killed and many others injured, according to a police officer at the scene “15 people who were seriously injured, some with broken limbs, many others collapsed but were resuscitated.” (source)

An example of the confusion the anointed water causes

This crush happened because desperate people sincerely believed that the solution to their problems lay in a little bottle of water. Why do they believe this? Because TB Joshua has told them. In a video accompanying the release of the new packaging TB Joshua claims that the water is the solution to your business problems, marital issues, financial constraints, sicknesses and other such issues.

Is there a biblical basis for these claims?

Throughout the Scriptures, we see clear proof that God can use any medium to express Himself:

But did David start producing anointed catapults? Did Peter start renting out his shadow? Did some enterprising disciple start distributing anointed mud and saliva? No! God spontaneously used these mediums to express himself, but there is zero evidence of a particular medium ever becoming a pattern.

This anointed water is billed as TB Joshua’s anointed water. People believe it is through this medium their breakthrough will come because the water “connects” them to TB Joshua and his anointing. This is has nothing to do with the Christian faith. Christians believe that all mankind is fallen and needs redemption through the blood of Jesus, but that redemption is available to all directly – no man of God, priest or intercessor required.

Perhaps, like Peters miraculous escape from prison God will also miraculously grant you breakthrough in an area of suffering, or maybe like James (who was execulted) your breakthrough will come beyond the grave. Maybe your healing will come instantly, or maybe like the great Apostle Paul you will be tormented in your weakness, but through it you will learn that His grace is sufficient for you, His power is made perfect in weakness (2 Cor 12:9).

Four people are dead because they desperately wanted this anointed water. Many others are alleged to have died after naively putting their trust in a little bottle of tap water instead of the medication trained doctors had prescribed.

If you’re still not convinced, ask yourself the following questions:

Credible reports are coming in that TB Joshua’s security guards have illegally detained four journalists reporting on his current visit to Ghana (source). The reporters were apparently filming the mayhem and gridlocked streets caused by TB Joshua’s arrival, when they were detained by his security guards and held against their will for hours, until the police were called and intervened.

Affail Monney, the President of the Ghana Journalist Association is urging investigations into this misconduct.

It is interesting to see how far SCOAN will go to control all their media output. Even in the age of smartphones and compact video cameras, you never see videos from inside SCOAN that aren’t from Emmanuel TV, presumably because of what happens to people who are caught filming without permission. This lack of transparency should concern anyone who has previously been impressed by anything shown on Emmanuel TV. What have they got to hide? 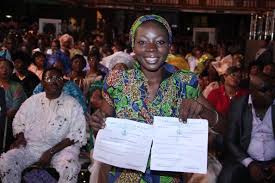 This is what counts as “evidence” of HIV healing at SCOAN

In our last post, we made the bold claim that nobody has ever been healed of HIV at SCOAN or by TB Joshua. Since then, several cases have been brought to our attention where people proclaimed healed of HIV by TB Joshua, clearly weren’t.

One reader told us of 4 soldiers from Volta Barracks, Ghana who went to SCOAN and received their “healing” for HIV. Sadly all 4 remain HIV positive.

A HIV positive reader from the UK told us that of all the people from the UK who have visited SCOAN for healing from HIV, not a single one has been cured – he and his wife are living testimony to this. Apparently SCOAN London are no longer organising trips to Lagos because of the embarrassment caused by so many non-healings.

An African reader once organised groups to visit SCOAN, including several HIV positive people who came without their infected partners. He wondered how they would avoid being infected again if they continued sexual relations with their partners. Apparently none of them had an answer, and nor did they want to go for tests to validate their claim of being healed.

Out of all the correspondence we received about the article, only a single person claimed to have been healed of HIV by TB Joshua, but when we asked whether he had actually taken a test to verify this we received no reply.

An ex-disciple sheds more light on the situation. He says:

I’ve been to TBJ’s crusades, many more don’t get healed than do.

How many people have been prayed for healing from HIV during the last 16 years at SCOAN? I’d estimate at least 15,000. How many of those people have returned with negative test results, perhaps 200, maybe a few more. What about the rest? Even those 200 are a bit dubious considering how rife corruption is in Nigeria.

How many people have been healed from HIV from outside Nigeria? ZERO. None. Nada. Is the Nigeria strain of HIV easier to heal than others……..

No confirmed cases of HIV being healed outside of Nigeria? Why only Nigeria?

An investigative journalist named Jacques Pauw wrote about TB Joshua a few years ago. He tells of the fate of several people “healed” by TB Joshua:

John Rindel went for an AIDS test at a private clinic in Johannesberg. He called me minutes after he had recieved the results. “I’m still HIV positive,” he said. “I’m sure it’s a mistake. They make mistakes with these tests, you know?”

“I hope they did, John,” were the only words of consolation I could think of.

“I might go back to Lagos,” he said. “I want the prophet to pray for me again.”

John Rindel never made it back to Lagos. He died a few months later.”

All of the cases listed above are in addition to the 3 deaths reported by the BBC and Sky News.

What are we left with? Lots more evidence of non-healings, no more credible evidence of genuine healings and reports of several unnecessary deaths. This is an incredibly serious issue, there could be thousands of people now infected by HIV because of these fake claims of healing. If a pharmaceutical company claimed to be able to cure HIV, a serious amount of empirical evidence would have to be gathered before they were allowed to make the claims. TB Joshua, or any other pastor making similar claims should be held to the same standards. The power of God can withstand scrutiny.