The formula never fails, a major disaster or attack happens and SCOAN release an edited video claiming TB Joshua predicted it. The horrific attack on French satirical magazine Charlie Hebdo is no different. There are two details edited out from the original prophecy:

Taken in its entirety, the prophecy serves no purpose. The attack still happened, there was no useful location or date, it happened months after the original prophecy. It’s one of many prophecies that would be quietly swept under the rug if nothing vaguely similar happens, but gets trumpeted from the rooftops when something matching its vague details does happen.

See the original unedited prophecy below, thanks to our good friend and fellow TB Joshua Watcher Gary McGoff for posting.

In our last post we exposed TB Joshua’s latest cut and paste prophecy where he claimed he predicted a bombing in America on a Monday, when in reality this vague prophecy was the result of three different, even vaguer prophecies which had been edited together to give us the impression it was more accurate than it was.

Some readers may have thought our analysis was petty and nitpicking, but to do so would miss the motivation behind what we do. We’re not writing to mock a self-proclaimed prophet who’s “prophecies” really don’t stand up to scrutiny. No, we’re writing because we’re angry. We’re angry that someone representing Christianity is using a tragedy for self promotion. We’re angry that what he claims was a prophecy was useless for anything except giving him bragging rights.

Well done TBJ .
8 people are dead. about 170 in hospital, many with amputations. They will spend the next few years with major psychological issues, and wont be able to think of anything else at night. Some wont be able to smell or handle raw meat. Others wont be able to stay calm after a balloon bursts.

And YOU have everyone clapping their hands- at YOU- because of your useless prophecies which help no one but yourself. You have everyone saying “well done Man of God!” “TB Joshua has pulled it off again!”

They’re right. TB Joshua has pulled it off again.

Yesterday, in the wake of the Boston bombing news, we posted the following on twitter:

Just a few hours later this video was released. Turns out our prophetic ability is better than we imagined.

Sadly this is just more evidence that TB Joshua will shamelessly exploit a tragic situation for his own gain. Sadder still, he has an army of devotees who will lap up everything he says, gushing on their social media profiles about what a “true man of God” he is, without considering the substance of what he has actually said.

Let’s condense the prophecy into a few bullet points:

When you look at all those bullet points together, it’s not hard to see why people are impressed. The event in question did happen on a Monday, it was a bomb and it happened in a large gathering of people. Of course there is no date on TB Joshua’s video, so we don’t know how many Mondays have passed before this “prophecy” eventually became fulfilled, but credit where credit is due – a fair few facts were predicted.

Or at least it would be, if he said all these points at the same time.

This video is an edit of 3 different prophecies. The points above can be split up as follows:

Now we see that the two most accurate elements of this prophecy (a bombing happening on a Monday) were told in two totally separate prophecies. A bombing was predicted, but not on any particular day of the week. Given today’s tense political climate a bombing in America is sadly inevitable. A bombing happening in a large gathering of people is just stating the obvious. It was flames and “something roaming around” (no idea how that fits in!) that was predicted on a Monday. Predicting flames and a day of a week is vague enough that it will fit with many events.

We’ve shown previously how TB Joshua edits out inaccuracies from his prophecies to make them seem more accurate than they really were. Here we see how he stitches together three different vague prophecies given at different times, that together seem reasonably accurate, but taken apart (as they were originally given) are so vague they could mean anything.

Update: We have been criticised for omitting to mention that the third prophecy was supposedly related to the first and second prophecy, therefore they were not all separate as we implied. This is certainly the impression you are meant to get from the was the prophecy video is edited together, but really this just further emphasises the deception. In the third prophecy he says “you remember I said last week to pray for America”, then mentions three other occasions he’s said the same thing. They want to to believe that he is referring to the previous prophecy where he predicted flames on a Monday. This clearly isn’t really the case, because if it were the voice over would have said something like “on the following Sunday service he said…” rather than “…on another Sunday service he said…” and they would have given dates. If this link were established he would have at least predicted a bombing in America on a Monday – not much help to anyone, but something at least. Without this link established, all we’re left with is useless, vague titbits which need editing together before they begin to resemble anything like reality. 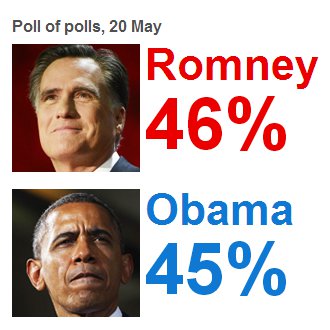 Back in May, TB Joshua faced a huge dilemma.  The US elections were fast approaching, but polls were showing it to be a very close race. This was going to be the biggest news story of the year though, so he HAD to predict something. He couldn’t possibly miss this opportunity to show off his prophetic prowess to the world.

What is he to do? If he guesses one outcome over the other he might get it wrong, then he will have no video to release. It will be too high profile an event to do a video editing hatchet job like he’s often done before. In this case, whatever he says – people will remember and hold him to it.

It’s just too close a call. How can he possibly get out of this one?

Unless…. Yes. That might work. It may be too close an election to guess the outcome, but one thing is certain – it will be a very close election! The polls have made that quite clear.

So that’s what he did. He predicted the “battle would be very, very close” *.

So Ladies and Gentlemen, for your own amusement – here is Mr Joshua’s incredible prediction:

* He may have waffled on about a few other issues as well, but the only prediction related to the outcome of the election was that it will be a close battle.

Since the recent death of Malawi’s President Bingu wa Mutharika, the internet has been alive with claims that TB Joshua predicted it. The claims referred to a prophecy which TB Joshua gave during a live service on Sunday 5th February 2012. Numerous rumours were circulated about the time period of the prophecy; many believed he said this head of state would die within 60 days. SCOAN denied that there was any timescale given with the prophecy, which I expect they are regretting now since Mutharika died precisely 60 days later.

In this article, we aim to cut through the hysteria surrounding this prophecy to look more closely at the facts and the context.

First of all, we need a reality check:

Secondly, the questions should be asked about how much TB Joshua already knew about Mutharika’s state of health. His Vice President Joyce Banda has very publicly expressed her support for TB Joshua in the past and regularly worships at SCOAN in Lagos. She said she visits the church “just the way some Christians visit Israel, or Muslims visit Mecca”, a comment which tells us a lot about how she views TB Joshua. It’s not beyond the realm of possibility that TB Joshua had some insider information that Mutharika was already on his death bed. Despite being constitutionally placed to succeed him, Banda was not on the best of terms with Mutharika after falling out with him in 2011 and being expelled from the party, leading some to speculate an even more sinister connection than this, but we’ll leave the conspiracy theories to others.

Finally, the bible makes clear that even if a prophecy seems accurate,  this does not mean it was necessarily from God. The accuracy of a prophetic word is only one factor to consider when weighing the legitimacy of a prophet (which lest we forget, all Christians have a responsibility to do).

So again we must ask the question: What purpose did this prophecy have?

“(This prophecy) is unbiblical. There is no biblical precedence to that prophecy. God’s character is not given to inciting or causing confusion, despondency, apprehension or fear in individuals or nations.

In the Bible, when a prophet is given a message regarding an individual’s ill health, death or demise of a leader, whether it is a good leader or bad leader, the prophet is given specific instructions to approach the particular leader and speak directly in the presence of some witnesses.

TB Joshua has caused despondency, fear and apprehension. The prophecy is so general and open to anyone’s interpretation, it is not of God. He is very clever to make vague prophecies and has never been caught to be a false prophet. This guy is just a trouble causer.”

TB Joshua is up to his usual tricks, releasing a video claiming that he predicted the death of a famous person, this time former Apple CEO Steve Jobs. Of course, all he actually predicted (on an unspecified date that could have been months or even years ago) was that a famous American will die after having a serious ailment. Excuse us if we are not impressed. These were his words (broken English left uncorrected):

The giant nation should pray for one of its hero.
He has been wrestling for some time.
It’s left to him and his family and God.
But the vision I have three days ago
A hero in the United States
That when he pass on, people crying, shouting
‘this is not the right time for such a hero to go’

Pray for the protection for this hero… we pray to see whether it is changeable. We are still praying for God to protect this hero. He is wrestling, wrestling. There is an ailment that will take his life. This is affliction. Prayer.

As we have mentioned before, these vague prophecies are win-win for TB Joshua. If happens, it proves his prophetic powers, but if it doesn’t it was because his followers prayed against it happening. This post explores in more detail what is so problematic about TB Joshua’s so-called prophecies.

Of course, the main purpose of this soothsaying is to allow TB Joshua to jump on the bandwagon of a popular news story. Does it glorify God? Does it support and encourage?  No. It is a cheap and blatant attempt to glorify TB Joshua. Let’s hope that most people have the wisdom to see through it.